Don't give up the day job

He told it as if it was a joke, but clearly Will Massa, British Council film advisor, had a serious purpose. He said: "Why does everyone want to be a film maker. Stop it. Put the cameras down." 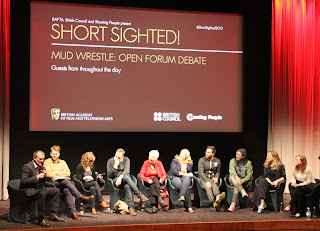 He was probably trying to be provocative (it was at the Mud Wrestling session, devoted to trenchant comments and inflammatory exchanges). "That traditional route of making two or three shorts and then making a feature doesn't seem to be working any more," he continued. As a result, he opined, film makers need to have a second string to their bows. Don't give up the day job.

But Jason Sondhi, co-founder of the rather remarkable Short of the Week web site (devoted to films rather than alcoholic beverages or items of sports clothing), claimed he knew of 14 or 15 Hollywood projects that had started with short films.

Probably true, but the fact that the films made it is no guarantee that the film makers also jumped up a league!

After that it could have been either Will or Jason who said: "This is an incredibly competitive business and even the people with talent, 99% of them are not going to have the sort of stellar careers that they want."

Maybe I had a jaundiced view. The day started badly for me when I arrived at BAFTA (just a few yards away from London's Piccadilly Circus) and the receptionist seemed to be asking if I was there because I was short sighted.

I hadn't stumbled up the stairs so I was curious as to why there was a feeling that my eyesight might be less than perfect. But I'd really been asked if I was there to attend the Short Sighted event, a full day of seminars devoted to the art of making movies that last considerably less than 90 minutes.

Despite the pessimism and the fact that you didn't have to read between the lines to work out that for almost everyone short film making is a labour of love rather than a business, there was a heck of a lot of useful advice and information.

For example, I intend to join two Facebook groups: Cinematic Drifters and BAFTA Shorts (if they will have me). I was also astonished to learn that Shorts International has to obtain 3,500 short films a year to broadcast on its channel. That means that if you can't get one into its programme it is officially the 3,501st worst film issued that year.

Of course, broadcasting achieves recognition and the nice warm glow of realising that someone out there cares about the film you've just sweated blood to complete. What it does not get you is the money to pay the rent, or to allow you to make the next film.

To bring in the cash you need that second income stream, that day job.
Posted by Jonathan Brind at 12:13

Jonathan Brind
I'm a local newspaper trained photo-journalist, who worked as a b2b (business) editor for many years. Since about 2000 I've been making high spec videos.